The foxhole concept in social dialogue 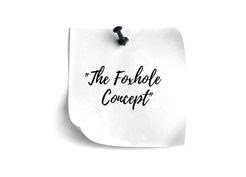 The Foxhole is a phenomenon that found its origin in warfare.

Technically, the definition of a foxhole is ‘a hole in the earth that is used by a soldier as a small fort’. From the safety of a foxhole, troops are protected against enemy fire.

Often parties to the social dialogue or social negotiation process act in a self-destructive mode.  They waste a lot of energy and the result of their efforts is negative. This situation is also characterized by a lot of self-serving behavior.  In many cases, management just writes a check to solve the issues.  Unfortunately, this does not address the root cause of the problem and in the long run it sets the organization on the slow but sure road to permanent decline.

The self-destructive mode of interaction at the ‘social table’ is characterized by a lot of miscommunication, a very defensive or offensive attitude (from both sides), blaming and sometimes even threatening each other.  Weeks and sometimes even months go by with more losers than winners coming out of the dialogue or negotiation.

That is where the foxhole comes in.

Management scientists bumping into this phenomenon of war discovered that it could be used in business as well. They found that even the most antagonistic individuals make progress faster and use significantly less energy when they operate in a foxhole.  It makes them realize that they are interdependent and that success depends on working towards a common goal which takes into account the priorities of all parties.

Mastering the foxhole concept in social dialogue does not happen overnight: it requires extensive practice, a significant amount of patience and especially a lot of respect for the ‘other side of the table’.  Respect does not mean agreeing to everything but it means you understand each other’s frame of reference and that it is in the interest of all parties to make sure the organisation is sustainable in the long term with engaged employees, faithful customers and satisfied shareholders.

As ‘Darryl Connor’, a world-famous change expert said: “Common goals and interdependence form the foundation of synergistic willingness.  Because synergy is difficult to attain, people are only willing to move beyond their sense of self-containment when it becomes obvious they will fail at something valuable if they don’t work as a team”.  Constructive social dialogue and negotiations are extremely important to any organization and it is often forgotten that they also lead to a true competitive advantage.

Much more than a necessary evil, they are at the core of successful change and transformation management projects.

Any leader who chooses to ignore this does so at his or her own peril.